We cannot afford for Facebook to dictate the outcome of another election
! 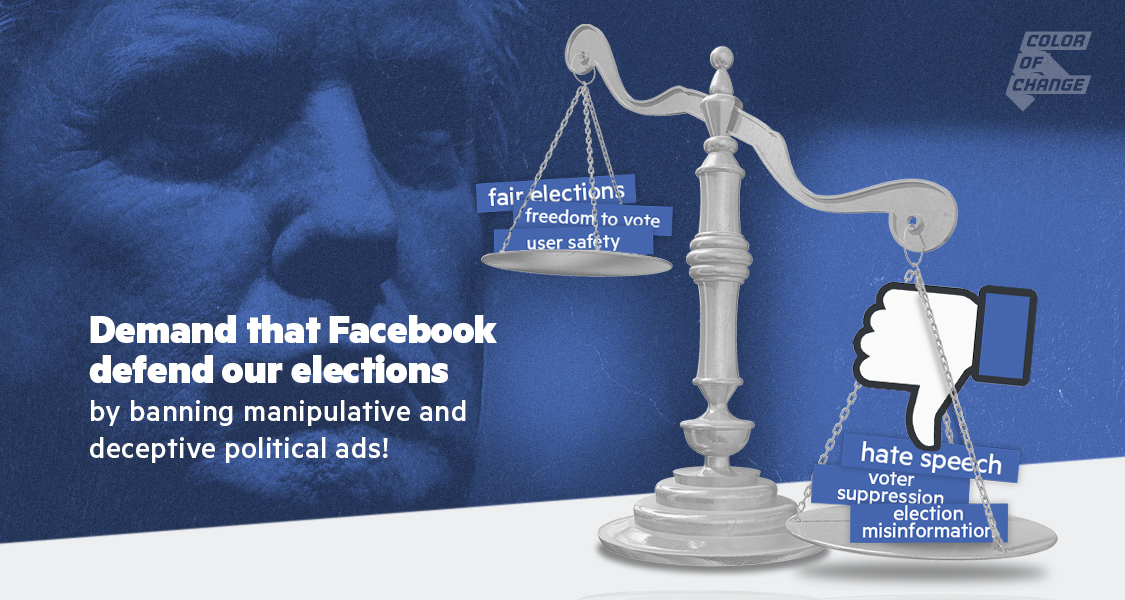 It’s no secret or conspiracy theory that widespread disinformation on Facebook contributed to the election of Donald Trump,1 whose Presidency has been defined by overt appeals to white nationalism and the rollback of key protections and resources for Black communities. With the 2020 election already underway, it is imperative that Facebook own up to the ways its platform is used to manipulate and suppress Black voters by banning political ads with false content from its platform.

Demand that Facebook defend our elections by banning manipulative and deceptive political ads!

We know Trump lies all the time and because of Facebook’s reckless political ad policy, he’s able to send out political ads with false, and even defamatory, information to millions of Facebook users daily, micro-targeting individual voters.2 Under Facebook’s current policy, candidates with the most money have the most influence, pushing their agendas and disinformation onto vulnerable populations. Research on the 2016 election showed that Black people were most impacted by the disinformation spread on Facebook.3 Despite all we’ve learned since 2016, Facebook is doubling down on their commitment to allow Trump and other right-wing candidates to manipulate our elections.

This election cycle, it’s not just Trump we have to worry about. Any candidate or paid influencer can spread misleading ads, and as long as ads are labeled political, Facebook will approve them. Trump’s fellow New York billionaire, Democratic candidate Michael Bloomberg, spent $45 million to flood Facebook with 142,937 ads since November, some of which contained false narratives of his Democratic running mates.4 Facebook’s reckless political ad policy is a direct threat to fair elections this year.

Tech giants Google and Twitter have already put standards in place to weaken the impact of false political ads. Google is limiting political targeting,5 and Twitter has banned political ads,6 but Facebook is making it easier for politicians to spread disinformation. Given their base of 2.5 billion active users, Facebook's platform is the most far-reaching and most harmful.


This political ad policy allows any politician to run ads mis-informing voters about their opponents, promote blatant white nationalist propaganda, and use fear-mongering to push Black and migrant communities not to participate in the critically important 2020 Census. And even though Facebook has stated that mis-informing Black voters about how and when they can vote is against the rules, because they refuse to fact check ads, it would be too late to stop a massive voter suppression campaign rolled out right before election day.

Facebook is not only denying that voter suppression is a problem on the platform, it’s openly welcoming it.

When trying to understand why Facebook would continue to allow this clearly harmful ad policy, we learned that Trump and other party leaders have pressured Facebook by making unproven claims of bias against conservatives. These are the same conservatives who refused to impeach a President accused of perjury, and who blocked every witness from testifying in the impeachment trial. These are the same conservatives who consistently choose partisan politics over human decency. They have a stronghold over Facebook’s leadership. But Facebook is nothing without its users.

That’s why we’re working with a coalition of civil rights organizations to pressure Facebook to end this harmful policy. When we stand up together in great numbers to demand protection from being targeted with false information, Facebook cannot ignore us. We cannot afford for Facebook to dictate the outcome of another election ! We are in the midst of an intense Democratic primary, with 9 months until the Presidential election. This cannot wait.